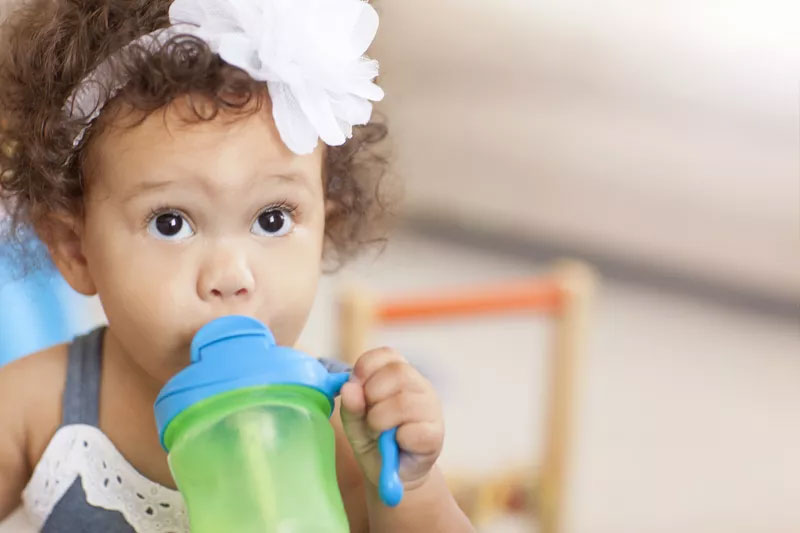 Your little one grows and develops in so many ways during their first year, and that includes moving on from their bottle and/or the breast. The American Academy of Pediatrics (AAP) recommends using a sippy cup as a transition between a bottle and an open cup.1

Every child develops at their own pace, but if your infant has good head control, can pick up and grasp items, and is able to sit well in a high chair, the time might be right for a sippy cup, says pediatrician and international board-certified lactation consultant Jessica Madden, MD, IBCLC, who is medical director at Aeroflow Breastpumps. In her experience, the earliest this usually happens is around age 6 to 7 months.

When Should I Transition My Child to a Sippy Cup?

It’s really up to you when you make the move, but Adrianna Bravo, MD, FAAP, pediatrician and senior medical advisor for Inspire Diagnostics, recommends doing it before your child’s first birthday.

If your child is breastfed, you don’t necessarily need to stop breastfeeding before the sippy cup transition. “A breastfed child should be using a sippy cup by 12 months but can choose to continue to breastfeed as well,” says Dr. Bravo.

The AAP advises switching to an open cup (such as a two-handled cup) as soon as your child can manage it, usually before age 2.

Can My Child Drink Milk from a Sippy Cup?

Speaking of breastfeeding, it’s absolutely fine for your child to drink breast milk out of a sippy cup. Formula, cow’s milk, and plant-based milks are fair game too, although Dr. Madden points out that the earliest non-formula or breastmilk milks should be given at all is after the child turns one.

“I only recommend drinking milk from a sippy cup for short periods of time as there are risks with milk being left out at room temperature for too long,” Dr. Madden adds.

Your child can also drink water from a sippy cup, but in general, water should not be a primary source of liquid for a child under 12 months, says Dr. Bravo. “This is a time of vital growth, especially of the child’s brain,” she explains. “Unfortunately, while water provides hydration, there’s not really a lot of caloric or nutritional value.”

However, very small amounts of water can be a good choice to demonstrate the use of the sippy cup and help your child adjust.

The AAP warns that frequently drinking milk or juice can lead to tooth decay because bacteria grow in the sugary liquid.1 For this reason, it’s not a good idea to let your child go to bed with a bottle or a sippy cup.

Dr. Madden also warns against putting hot liquids in a sippy cup due to the risk of burns.

Remember, your little one only needs to drink when they are thirsty or eating a meal. A child who is attached to their sippy cup most of the day may end up drinking too much.

How Do I Transition to a Sippy Cup?

The key is to take it slowly, say the experts. Dr. Madden suggests introducing a sippy cup once a day, while your child is eating a meal in a high chair.

“’T’ stands for transition slowly—don’t expect to one day have your kid on the bottle and the next day on the cup,” she says. “That can be traumatic for both the child and the adult.”

Next, “I” stands for interact. Allow your child to interact with the cup, almost treating it like a new toy. And you can join in by holding it, dropping it, and exploring the cup and the lid.

Finally, E stands for encouraging excitement. “We want to show kids that change, although scary, can also be exciting,” says Dr. Bravo. “Cheer their first sip!”

Will I Need to Revert Back to a Bottle?

There are occasions when infants and toddlers might “regress” back to former developmental stages, i.e., if they are sick or not feeling well, or going through a big life change like the birth of a younger sibling. This is typically normal, so don’t worry about it. Dr. Madden believes under these circumstances, it’s probably okay to let your child temporarily go back to drinking from a bottle.

Dr. Bravo suggests speaking to your pediatrician or healthcare provider as well, as they can help you investigate if there is something physically prohibiting the child from making the transition.

But remember, a child who resists the cup is not a failure. “All kids transition at different rates with different comfort levels,” Dr. Bravo says. “Some resistance can be very normal. In fact, it may be an opportunity to try and transition to more solid foods.”

A Word From Verywell

A sippy cup can help your child transition from a bottle to a regular open cup, but it shouldn’t be used for a long time or carried around and kept in the mouth. If your child is resistant to the change, be patient and take it slowly. And remember that some kids go straight from a bottle to an open cup.