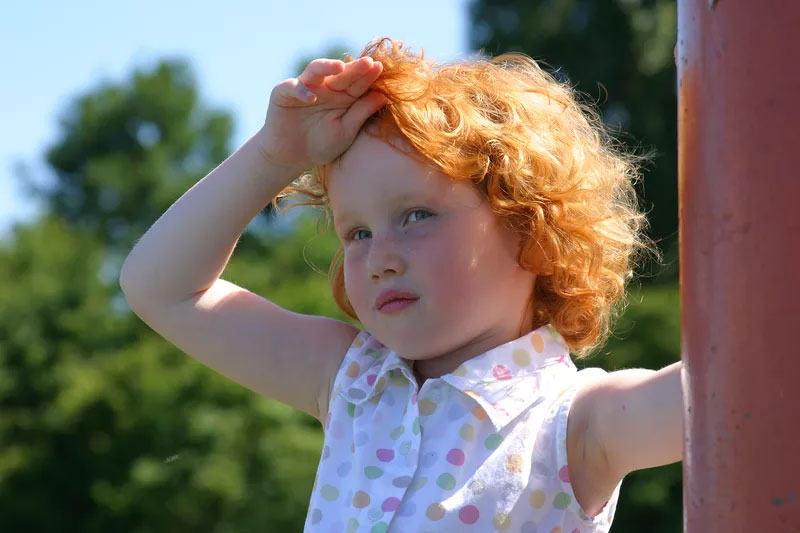 Heat stroke, the most serious heat-related illness, happens when body temperature gets out of control and the sweating process malfunctions. Usually, sweating cools the surface of the skin when the water in sweat evaporates. Without this, the body can’t cool down, and body temperature can rise to 106 degrees Fahrenheit or higher within 10 to 15 minutes.1

Most kids spend lots of time outdoors during the hot summer months, so it’s important to know how to prevent heat stroke, and to be aware of the signs and symptoms of the illness that your child may not be able to communicate to you. Let’s take a look at what they are and what to look for.

“Classic heat stroke happens more commonly in children with excessive environmental exposure to heat,” says Dr. Segura. “It’s more common in young children because they can’t escape from hot environments. A too typical and tragic example is a child restrained in a car seat left unattended in a vehicle. Temperatures inside closed vehicles rapidly rise to dangerous levels.”

Exertional heat stroke is more common in older children and teenage adults who take part in strenuous exercise during high temperatures and humidity. “The highest rate of heat illness in high school athletes is found among American football players, with a majority of these episodes occurring in August,” Dr. Segura says.2 Sweating during hot weather can lead to dehydration because sweat loss exceeds fluid intake.

However, they both fall on a spectrum of heat-related illnesses, so to understand the difference it’s essential to understand the context of that spectrum. As Dr. Bravo explains, it starts with heat rash, which is prickly heat caused by sweat being trapped in the skin’s pores.

Next on the spectrum is heat cramps. “You may or may not have had a heat rash to get to the heat cramps phase of the spectrum, but once you are at the point of heat cramps, the body has seen so much heat it is over sweating to try to manage the heat and the body begins to lose salts, fluids, and electrolytes,” says Dr. Bravo.

When you lose too much, the muscles start to cramp because they need liquid and electrolytes to function correctly—for basic activities like walking, never mind running around on a soccer field in the summer.

If you go past the heat cramps phase of the spectrum and the body still can’t cool itself, you get heat exhaustion, which is when the body realizes it can’t cool itself well enough with the sweat it is producing. “The body then goes into overdrive and sweats profusely,” Dr. Bravo says. “The muscles start to feel very fatigued and the skin might look pale and be clammy to the touch. If you go past this point, you end up at the extreme end of this spectrum, which is heatstroke—where the body’s temperature has not been able to cool itself to a normal range.”

The common signs of heat stroke are red, dry, hot skin, a lack of sweat, confusion, dizziness or fainting, slurred words, and difficulty making sense, says Dr. Bravo. Cognitive changes are also likely, meaning your child may start looking confused and become agitated. In some extreme cases, they may hallucinate or have seizures, and their skin frequently will be very, very dry.

If you notice your child’s body temperature, even to the touch, feels like it is up at 104 or 105 degrees, that is heat stroke, Dr. Bravo warns, and you should seek medical care immediately.

Although the signs and symptoms of heat stroke may vary from person to person, they don’t necessarily differ by age, race, or sex. “A patient with heat stroke may experience one or several symptoms, but not everyone will have all the signs,” says Dr. Bravo. Children who have obesity may have a more difficult time from a cardiac perspective. Generating the heart rate needed to produce sweat to cool the body, and certain chronic illnesses, such as sickle cell disease, also make a child more susceptible to heat stroke, she adds.

Heat stroke is always a medical emergency, so the first thing to do if you think your child has heat stroke is call 911, says Dr. Segura. Next, help your child cool down as quickly as possible by removing their clothing and moving them out of direct heat to a shady place or inside a car or building with air conditioning.

Other ways to accelerate cooling are spraying them with water and fanning them.

“You can give them cold liquids, take a cloth soaked in cold water or an ice pack and lay it on the back of the child’s neck, armpits, or groin,” says Dr. Bravo. “Those three areas of the body—where large blood vessels are located—absorb the coolness the quickest and can rapidly cool the body.”

It’s also crucial to hydrate your child. “Even if the liquid you have on hand isn’t cold, getting that hydration is essential,” Dr. Bravo says. “If a child is at the point of heat exhaustion, they have been sweating trying to cool the body, and they’ve lost a lot of liquid and electrolytes that need to be replaced as a matter of urgency.”

If you have access to sports drinks or something that has electrolytes, those are the top choice for rehydration. Otherwise, anything with water in it helps.

Remember, heat stroke is not a state you’ll be able to reverse on your own. “You need professional medical help beyond the medical help that might be on the sidelines of a sports game or at the outdoor festival you may be attending,” says Dr. Bravo.

How to Prevent Heat Stroke

Dr. Bravo believes an ounce of prevention is worth a pound of cure, especially when it comes to heat exhaustion and heat stroke. “I’m a huge fan of having a mnemonic to remember everything I’m supposed to do to prevent heat stroke,” she says. She suggests memorizing CHECK SUN.

The first C is for Clothing choice. “It’s a wise idea to wear clothing that is a light color because black or dark-colored shirts out in the sun just absorb more heat,” Dr. Bravo says. Moisture-wicking clothing is a great option, and choose short sleeves rather than long sleeves in most situations.

The H stands for Hydrate. Dr. Bravo points out that it’s not enough to just hydrate once you start to feel sick. Pre-hydration is key, so send your child into their activity at the festival or the sports game or line at the beach (or whatever it may be) already hydrated, and keep them hydrated throughout. “Again, water is a great choice, but sports drinks are even better,” she says.

E is for Every so often, take a break and get out of the sun. Dr. Bravo recommends getting into the shade or an air-conditioned indoor place for a few minutes at least once every half hour. “This will give your body the chance to cool down naturally,” she explains.

The next C stands for both Chill out and Cool down. Have ice on hand and have a cool towel with you in case your child does start to feel extra hot. Cooled drinks are great not just for drinking but also for putting on the back of the neck—almost like an ice pack. “It’s excellent prevention before you get to the point of heat exhaustion to make sure that you’re chilling and cooling yourself,” Dr. Bravo says.

K goes for Keep away from midday. Dr. Bravo always reminds people it’s a good idea to avoid the hottest heat of the day, which is generally from noon to 6 p.m. If you’re taking your child to a sporting event, festival, or the beach, it might be more difficult not to be in the sun during those times. But keep in mind that if you can stay out of the sun as much as possible during the high heat of the day, you’re going to decrease the chance of experiencing heat exhaustion or heat stroke.

The S is for Sunscreen, which protects your child’s skin from sun damage but also helps to avoid some of the temperature absorption from the sun. “Wear sunscreen so that your skin is healthy enough to be able to do the job of sweating and deflecting the heat,” says Dr. Bravo.

The U stands for Under the shade. Again, take time to get in the shade and get away from areas where it’s sunny.

Finally, the N stands for Notice the signs. By being aware of the signs of heat exhaustion and heat stroke and paying attention to what’s going on around you, you can respond quickly to the first sign of a problem if it reaches that point.

A Word From Verywell

Heat stroke can occur in a child who has been exercising or playing in the heat, then becomes dehydrated from losing excessive fluids and salt from sweating. Heat stroke is at the extreme end of the heat illness spectrum, and is always a medical emergency. Calling 911 is the first thing you should do if your child is showing any of the common signs of heat stroke.

However, you can avoid this situation by learning how to recognize the symptoms of heat exhaustion and taking immediate steps to cool them down.